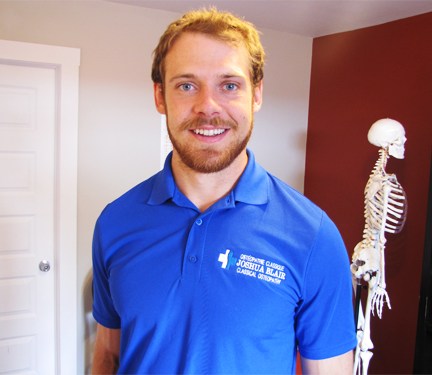 Who is Joshua Blair?

Classical Osteopathic Manual Practitioner
My dad will say my career started in manual therapy when I was 2. Walking around on his back at the end of a long day on the family farm to apply a poor man’s version of a massage. I grew up in a small town in southwestern Quebec, on a small farm producing apples, maple syrup, as well as raising beef cattle. I learnt my work ethic and strong community values through my family. I took a liking to sports from age 4, when my grandfather gave me my first hockey stick. I was obsessed with the Canadian triathlete Simon Whitfield, ate cheerios every day, and swam, biked and ran many mini triathlons around the farm.

My obsession continued through adolescence where I excelled at a variety of sports, including hockey, basketball, football and rugby. I then earned a BSc in Nutrition from McGill University, learning the importance of diet in helping and preventing disease. Since then I have run a few races, a marathon (most likely the first and last), and have taken up biking, hiking and cross country skiing. I picked up meditation and visualization through Osteopathic school, which have greatly impacted my mental wellbeing.  I am fascinated by the many  ways we can manipulate the body and mind in order to completely change the projection of a person’s life.

After a decade of high level  rugby, I was finally treated for the first time in osteopathy in the summer of 2014. As you can imagine, my body was a wasteland of old bumps and bruises. But I was used to it. Now, after being on the receiving end of many osteopathic treatments, my body feels better than ever. My old injuries finally are healing as they should have.

I think our light can only be found in dark places. After earning a BSc in Nutrition at McGill, I had yet to find a path I could really get excited about. I decided to spend the summer working on the family farm and throwing my all into rugby, where I was looking to get back into playing at a high level after some early success. However, I had been having some difficulty after getting a second concussion which ended my University rugby career a couple of games too early. It was during that summer that I discovered osteopathy, helping improve post concussions symptoms I had been having for months, on top of all the other bumps and bruises that had been piling up over the years. Throughout my long athletic career, I have been fortunate to have been followed by excellent therapists, experts in their respective fields, however, none have caused the impact osteopathy has had on my body and overall well being,

After this my search for Osteopathic education began, where I discovered the Canadian Academy of Osteopathy, the school that took up almost all of my time for the next 4 years. It was there I was first shown the impact a treatment can have on any condition. Not only improving outcomes but completely eliminating problems. Even as a student we were treating and seeing vast improvements in people who had been trying to recover for years.

What sells osteopathy for me is when a person walks in with no to little expectation that they can be helped in any way. They’re in dire straits, and somehow, with properly applied treatments, their world changes. They regain motion, regain hope, and regain their chance at doing the little things in life that make it complete. Whether that’s just getting out of bed in the morning, playing with their kids or extending their sporting career. Osteopathy has done much for me in giving my life a purpose, something I can work everyday at, improve and never get tired of it. Seeing the impact it can have in other people’s lives only pushes me onward through increasingly difficult cases.

What makes my approach different?

It’s one thing to point out areas that aren’t moving, it’s another to understand why. What connections does this area have? What other areas are connected to it through blood, nerves, muscles and ligaments, and what other areas might influence its ability to move normally. A quick example is how a twist in the hips can pull through the lat muscles and affect how our shoulders and neck can move. The connections are endless, but a trained mind has seen the patterns before. From there it’s a matter of testing the motions of these areas, to find the areas that are really creating the problem.

Some other schools of osteopathy work on 45 min to an hour treatment. This would be unheard of in the early days of osteopathy, where 15 minutes was a long time. The greater the understanding of the body, the less treatment that needs to be applied. On top of that, there is no one-size fits all solution for everyone. There are no techniques in classical osteopathy, only endless ways to manipulate the body to free up the problem. Once the solution is found, the body can begin to work normally again and the problem greatly improves. It may even disappear entirely if given enough time. A much better solution than just managing a problem over time.

I have an interest in how sports affect the way our body’s form and at what cost this comes at to the rest of the system. I am also interested in the power of our diet, mind training and methods of exercise that try to challenge all joints of our body.